Having cultivated a bit of an interest in robotics over the past few months, I bit the bullet and ordered a Sharp GP2Y0A21YK Infrared Proximity Sensor. This produces an analog voltage output that varies in relation its distance from objects in its sight. Here’s what it looks like (mounted atop a stepper motor):

I needed a circuit to test it out, so here’s what I came up with: 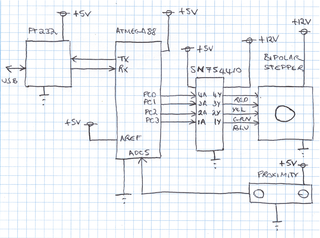 The basic idea was to use a trusty Atmega88 micro to drive a bipolar stepper motor via a rugged SN754410 dual H-bridge driver IC. The micro was programmed to make one full rotation counter-clockwise slowly and then return to its “home” location by turning clockwise one full rotation.

The proximity sensor was mounted atop the stepper motor. During the slow scan, I set the Atmega88 to sample its 10bit ADC on channel ADC5 - which was connected to the proximity sensor’s output - after each step of the stepper motor. The ADC readings for each step (220 in all) were sent to a computer for logging via the FT232 Serial-to-USB converter. 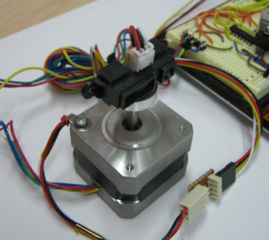 Here’s the layout on the breadboard, with the Atmega88 mounted on the green PCB, the SN754410 to the mid-left, a +5V regulator immediately below it on a heatsink, and some LEDs to the right to show the status of the drive channels for the stepper motor. The FT232 is not shown - it’s mounted on a separate breakout board that connects to the 6-pin header on the green PCB: 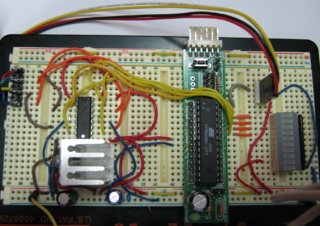 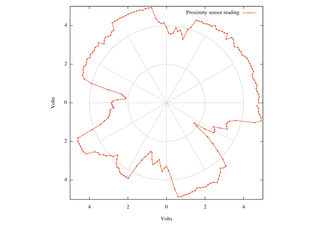 In this case there were four obstacles placed on a clear table around the proximity scanner. The object at top was the furthest away - the objects to the left, right, and bottom were considerably closer. Looks like the sensor works well!

There are four things to note about the graph above:

The solution to this is to derive a formula for the voltage-vs-distance curve (regression analysis)  and to plot the distance for the measured voltages. Nevertheless, this quick test shows that the sensor performs well. 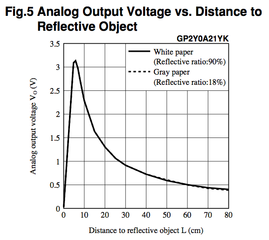