I wanted a robust enclosure for my Orange Pi Zero, so it could be placed outside and withstand at least a bit of dust and a little rain from time to time. It had to expose a power connection and a USB port and have good wifi reception. The principle use case was as a headless Linux box to run dump1090 so I could track aircraft using an attached USB DVB-T dongle.

Here is what I came up with: 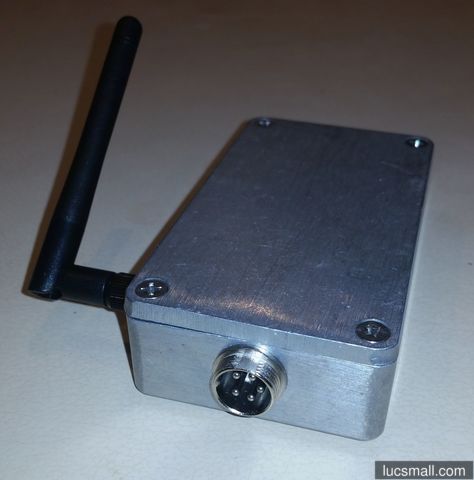 The Orange Pi Zero is housed in a diecast aluminium enclosure. Power is provided by a 2-pin GX16 connector at one end, while USB signals are carried over a 5-pin GX16 connector at the other end. I like the GX16 connectors since they are fairly easy to solder, very mechanically robust, and have an old-world aesthetic. Wifi is brought out to an external antenna not unlike one found on the back of a wifi router. All in all, this setup feels pretty solid.

Read on if you’d like further details, including a bill of materials, a connection diagram and a drilling template. 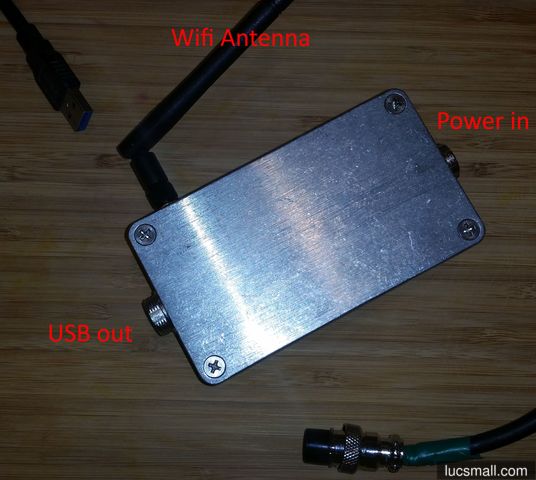 I used the following materials for this project:

The H2+ chip on the Orange Pi Zero can run pretty warm in operation, so a heatsink is not a bad idea. The chip measures 14mm x 14mm so I hopped onto Aliexpress and ordered some heatsinks to suit.

I glued the heatsink to the H2+ chip using “heatsink plaster”. This is a thermally conductive rubbery substance that eventually hardens (it took like 24 hours to set). An alternative option is to use thermally conductive double sided adhesive tape. Whatever option you choose, this is more easily done before the Orange Pi Zero is mounted in the case.

Next I drilled the case. First, four M3 holes in the base of the case to mount the Orange Pi Zero. Then a 16mm hole at each end for the two GX16 sockets. Then a smaller hole on one side for the wifi antenna reverse SMA connector.

I created the following templates to assist with drilling. Feel free to download, print, and use them:

I wired up the Orange Pi Zero to the connectors according to the following diagram: 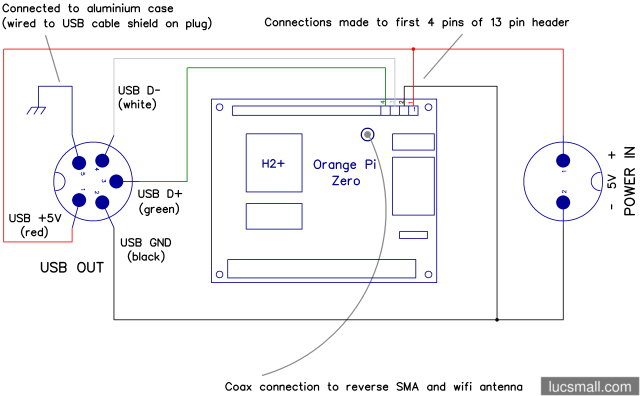 A PDF version of this diagram is also available for download.

With the lid off you can see how I used JST connectors and “dupont” connectors to make connections to the Orange Pi Zero’s 13 pin header: 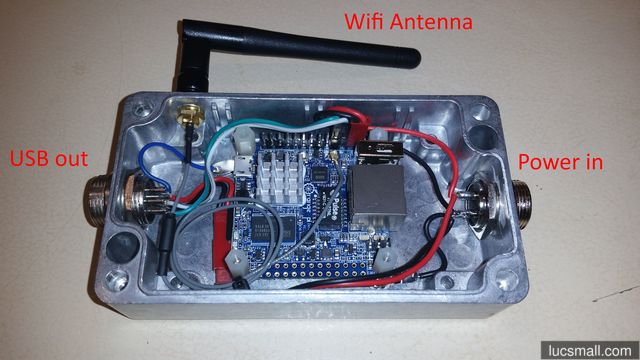 Putting it to use

In order to use the ruggedised Orange Pi Zero, I had to create two cables. One was fitted with a 2-pin GX16 plug to supply power to the unit. The other was a USB cable with a type-A socket at one end and a 5-pin GX16 plug at the other.

I wasn’t certain that the integrity of the USB signals would be maintained over the 5-pin GX16 connector, but so far I haven’t noticed any issues in use.

As always, I can think of some improvements:

But for now, the current design works for it’s intended purpose - as a rugged computer for decoding ADS-B signals from aircraft.