In Part 1 of this series of posts, I described the process of reverse engineering the WH2 outdoor weather sensor from Fine Offset Electronics. Here’s what the sensor looks like:

The WH2 wireless outdoor sensor transmits on 433.92MHz - sometimes known as the 433MHz or 434MHz band - using On-Off Keying. In normal operation (after a start up period during which the receiving indoor unit attempts to discover the remote sensor(s)) the WH2 transmits a data packet every 48 seconds, as depicted below:

From now on, I’ll refer to these data bursts as packets.

Within each packet of data, binary 1s are encoded as 500 microsecond wide positive pulses; binary 0s are encoded as 1.5 millisecond wide positive pulses. Between each positive going pulse is 1 millisecond of “dead time” during which the transmission is idle. A natural consequence of the pulse-width coding approach taken is that packets can vary in duration for a given number of bits encoded. The pulse-width coding approach is summarised visually below: 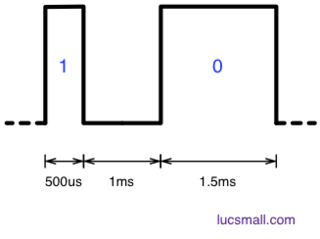 Each packet consists of 6 bytes of data - 1 byte of preamble, 4 bytes of payload, and a 1 byte CRC. The packet format is as follows: 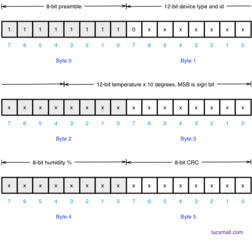 That’s it for this instalment. In the planned third part of this series of posts, I will explain how to use an Arduino to receive and decode packets from the WH2.