I’ve had a few MSP430 LaunchPad boards on my desk for ages and thought it was time to have a go at programming them. I like making clocks and the LaunchPad came with a nice 32.768kHz crystal that would make a stable timebase, so I set about making one.

As usual, I’ve made the schematic diagram available (see below), in case you want to build one yourself. I’ve also put the code up on GitHub so that you can compile and flash the firmware (and hopefully fork the repository and adapt it to your needs).

The 32.768kHz crystal is soldered to the LaunchPad board to provide the aforementioned timebase. I really like the crystal TI bundled with the LaunchPad, it has a real feeling of quality about it. 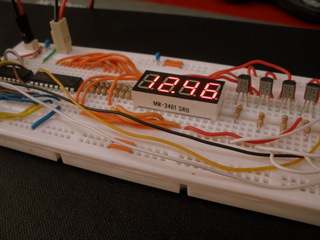 Jumper wires hook the relevant ports and power connections from the LaunchPad to the circuit constructed on the breadboard. Two switches are connected by jumper wires to facilitate setting the hours and minutes. 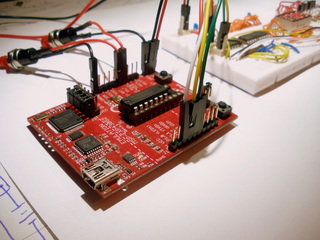 The display, a four digit common anode 7-segment display from Futurlec, is driven in a multiplexed fashion. The drive circuit is perhaps a bit over-engineered. It could drive bigger displays at much higher currents. It consists of two 74HC595 shift registers, which act as port expanders, allowing the 8 cathodes and 4 anodes of the display to be driven by just four MSP430 pins.

The display’s cathodes are driven by a ULN2803 octal darlington transistor array. It has integrated base resistors, so it’s safe to connect its inputs directly to the 74HC595’s outputs. The eight 82 ohm resistors limit the current going to the display. Four BC327 PNP transistors drive the anodes of the display. Being discrete devices, these require base resistors. 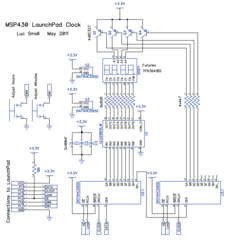 The code does a few things:

The clock has a fairly minimal feature set: