This is my entry in the Open 7400 Logic Competition. It’s a (wheely) bin night reminder. Because the competition was so open ended in its brief, I placed two constraints on myself:

First, I had to make do with the logic chips (and other components) I had on hand. No going to Jaycar or placing an order through Element 14; only junkbox parts allowed. I had more 4000-series parts than 7400-series parts, so the design is based on 4000 CMOS logic. Because of this constraint, it is sub-optimal in many ways - requiring more parts than had I had access to the more highly integrated CMOS parts.

Second, I had to make something that solved a problem I faced. I always forget to take the bins out on bin night. What I needed was a system of reminders. Sure, I could have set an alarm on my phone. But what would be the fun in that. So I set about designing the logic system required to remind me that:

Here’s the design I came up with (it can be adapted easily to cater to different bin collection nights or other weekly or fortnightly events): 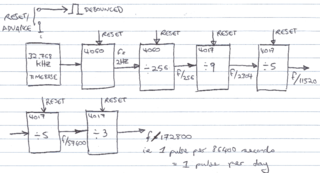 This first section of the design uses a stable 32.768kHz TXCO to drive a chain of dividers. The output is one pulse per day. The 4017s aren’t exactly ideal for this task; in the full schematic you’ll see some inverters interposed between some of the 4017s to make the chaining work properly. They also initialise in a random state - hence the reset lines going into each chip.

The one-pulse-per-day output is used to clock a 4017 that counts through a week. Each output of this counter is used to light an LED representing the day of the week. The “Monday” and “Tuesday” outputs are also used to drive the alarms. A simple toggle flip-flop is used to keep track of which week in the fortnight it is.

The last section of the circuit implements the alarms. The first alarm is triggered every Monday. An SR flip-flop is set when Monday comes around. When set, this flip-flop enables a simple Schmitt trigger oscillator that flashes a Red and a Yellow LED (to indicate that these bins must go out on the street). The alarm can be cleared by pressing the push button tied to the flip-flop’s reset pin. The Green bin alarm works identically, however it is only triggered on the logical AND of the Tuesday line and the “On” week line of the fortnight counter.

Here is the full schematic of the circuit. It’s a little more complex than the block diagrams, but implements the described functionality:

I built up the circuit on a breadboard - the major elements of the design can be shown below: 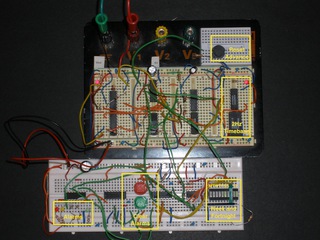 The great thing about this discrete logic stuff is how the chips from all the various manufacturers (TI, STMicro, Philips/NXP, Harris, etc…) all play nicely together. My breadboard build mixes chips from a variety of different vintages and manufacturers and it all works as intended.

The wheely bin reminder is really quite easy to use. It’s just a matter of powering it up some time around midnight on any given night of the week. I admit that the whole “midnight” thing is a bit of a pain - but it would take a fair bit more logic to do proper time setting. It’s then just a matter of pressing the “Reset/Advance” button until the correct day of the week and the correct fortnight is displayed on the LED readout. The “Reset/Advance” button fulfils the dual function of reseting the chain of 4060 and 4017 dividers and advancing the week and fortnight counters.

When bin night comes around, the corresponding LED will blink. It’s then just a matter of putting the bin out on the street and pressing the button to clear the alarm.

So far, after several weeks of running, the arrangement is working well. As long as power is maintained it should run indefinitely and keep good time. It would be neat to explore a battery backed version of the circuit. In principle, it could run for ages off a battery thanks to the low power requirements of the CMOS chips - provided that the LEDs are extinguished when in battery mode.

It was great to dabble with discrete logic design again. But, I might re-implement this one day using a single $2 micro!