This is an infrared remote control extender I built. There are a couple of minor differences but in general it follows this design.

The design consists of two units. One receives the modulated IR signals from remote controls and demodulates them back to baseband. The second regenerates a 38kHz carrier signal, modulates it with the received data stream, and drives an infrared LED using a constant current source. The two units are linked by three wires carrying power, ground and the received signal.

The project was part of a baby proofing exercise that meant that the TV cabinet had to be sealed off to inquisitive children. The receiver unit is mounted out of reach on the TV set and the wires are run to the transmitter module which sits inside the cabinet.

The unit works great with my Apple TV. It won’t work with all remotes because some use modulating frequencies well above the 38kHz this unit is built for, such as 56kHz.

Here are the schematics for the transmitter and receiver units: 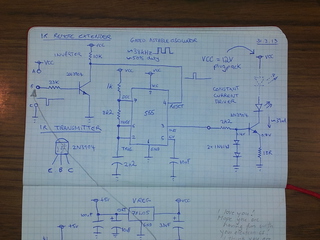